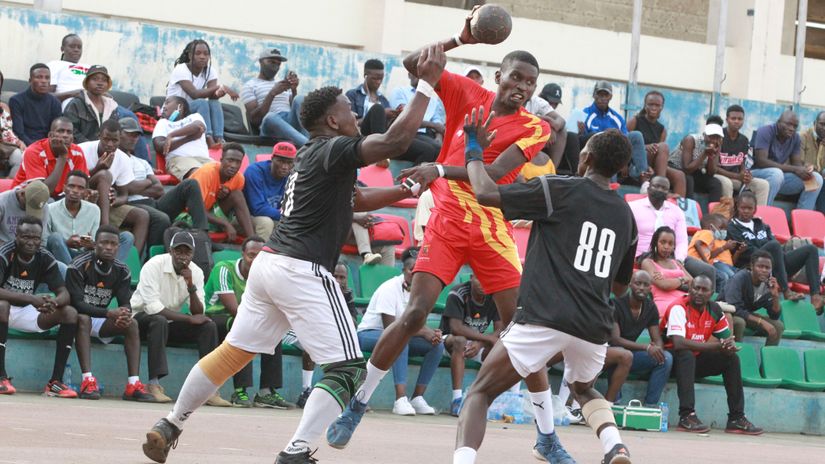 (Strathmore in past league action)
Matches continue on Sunday with final group encounters set for next weekend, paving way for the semis.

If pool B of the ongoing Kenya Handball Federation (KHF) men’s Super Cup matches was open, the door has just been swung wider by a draw in opening day fixture.

Strathmore University, in a derby against Kenyatta University (K.U) Wizards, escaped defeat by a whisker, scoring at the death for a 21 all draw leaving them with an uphill task in their next group match.

In an entertaining encounter played at the Nyayo Handball Court, Strathmore, who had majority of their players featuring in the University games early on in the day before the Super Cup match, had to fight in the last ten minutes of the match for the draw.

“We almost lost a match due to basic mistake that are needless at this level of handball. We allowed K.U to cut a four-goal deficit and go ahead, leaving us to chase the match which put the players under unnecessary pressure.

We were going for maximum points but have picked one. We not shift our focus to the match against General Service Unit (GSU) on Sunday, which will be no walk in the park,” offered Strathmore head coach Peter Mwathi, saying he would not blame fatigue for their result.

Strathmore led 13-11 going into the halftime break and extended their lead flto four goals upon resumption.

However, Wizards equalised the score at 18 goals and assumed lead at 18-19. With 20 seconds to go and Strathmore on possession, as they trailed 20-21, Wizards failed to execute their defense and left skipper Prevailer Muhani open in front of goal and he sloted in an equaliser to leave the opposition with two second to assume their lead. However, it was too little too late as the match ended in a stalemate.

“We did not start well as a team but eventually we recovered a four-goal deficit to grab a point. Our main weakness was not utilising our chances, we were solid on defense but our finishing will need some work before we head to the next match.

I am happy with the result, although we had a chance to win the match. However, we have a point that is crucial in a tough pool like ours. If we win the next match we will be assured of a place in the semi final. We owe this result alot to the fans who kept rallying us on even when we were trailing,” offered K.U skipper Samuel Katuva.

Morgan Simiyu and Samwel Kiprop scored five goals each for K.U as Brian Murangiri and Muhani contributed a similar number for Strathmore.