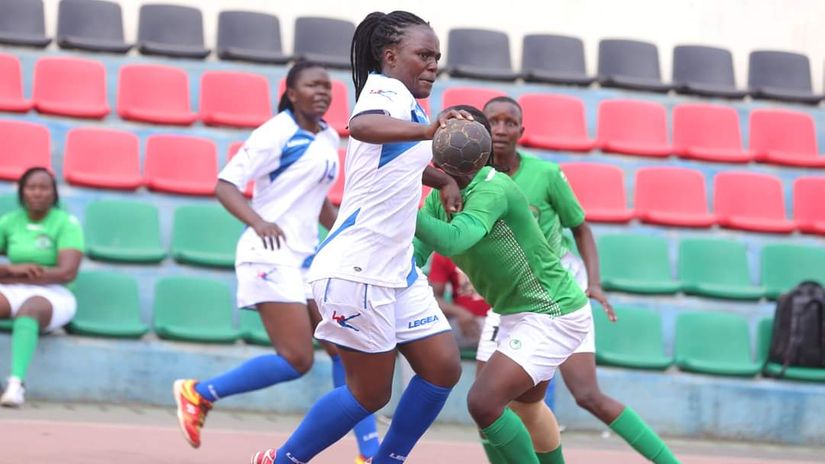 © KHF
The women’s and men’s matches are set for Sunday at 2 pm and 4 pm respectively.
It is considered a final even though the Kenya Handball Federation (KHF) women’s Super Cup is played in a round-robin format.

Holders Nairobi Water Queens are up against rivals Ulinzi Sharks in a title-deciding match set for 2pm on Sunday at Nyayo Stadium Court.

Both sides are coming for nothing short of the title. Both sides have the chance to win it unbeaten. Queens are on the title defense while the soldiers are eyeing a maiden gong.

En route to the Sunday match, Queens have picked convincing wins against National Cereals and Produce Board (NCPB) and Nanyuki while Sharks struggled against the former winning by a solitary goal and would be not want this to be decided on a goal difference.

“We are coming for victory and no in between. The team is fully prepared for the final match. The stakes are high but I am confident the players will perform.

I am pleased with the response of the players this week in terms of fitness so we have nothing to worry about,” said Queens assistant coach Thodosia Sangoro.

The tactician, who will have the burden of guiding the women’s side to, hopefully, another Cup title will immediately suit up for NCPB in the men’s final as they look tk defend the title against Ulinzi HC.

While the men’s battle is a different ball game altogether, Sangoro says the women’s performance has the ability to affect how he performs as a player.

“There is definitely pressure in holding the two roles and having these important matches on the same day just moments apart. If Queens play well, however, it automatically plays a positive role in me performing as a player since my mind is at ease,” he offered.

The military sides are out to stop Queens and NCPB’s dominance. The women have won the Cup title since it was introduced four seasons ago while the miller have won the last two men’s titles.