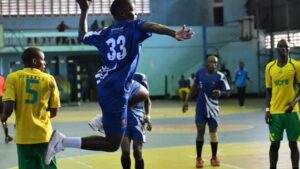 (A recent clash of Strathmore Vs NCPB in Dar es Salam)

NCPB have lost once in 13 outings while Strathmore remain unbeaten.

It could be the league deciding match, both teams agree. Had the league been open to fans, it would be one of those fixtures that brings any other activity around the Nyayo Handball Court to a standstill.

On Sunday 3 October 2021, National Cereals and Produce Board (NCPB), the Kenya Handball Federation (KHF) men’s league defending champions face-off with leaders Strathmore University in a match that has all the ingredients of a thriller.

The varsity side has not tasted defeat this season and boast a perfect run of 14 victories to lead the 19-team standings with 28 points. The millers, who have played a match less are second on 24 points. A loss to General Service Unit (GSU) remains the only dent to an otherwise perfect run for the Paul Pudo-coached NCPB.

“Strathmore will present the toughest challenge for us so far. Unlike GSU, the team we lost to, they come loaded with experience and a solid squad that has probably played together for the last five years. They are tactically and defensively the best team in the league seeing as they are coached by the national team tactician.

However, we have prepared well with this in mind and are going for nothing short of a win. Our experience and team chemistry is the advantage and weapon we have against Strathmore. Anything short of maximum points would be detrimental to our title defence. We are also keen on maintaining our superior goal difference as the league could easily come down to being decided on that,” said NCPB skipper Timothy Kirimi.

Ulinzi HC are third on the log at 22 points having played 12 matches for 11 wins and are tied on points with GSU who are fourth with an inferior goal difference. Black Mamba complete the top five teams, having lost one in 11 matches for 20 points. While the top five teams are still in the running for the title the top two teams look better poised to clinch it.

“This is a tough match and could easily be the title decider. We have prepared on all fronts knowing that we have a target on our backs and none of the matches will be easy. Our game is highly defensive but we will have to perfect our attack on Sunday to give us a chance for a win,” said the varsity side’s captain Prevailer Muhani.