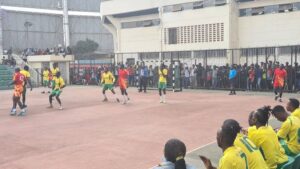 With only four rounds left in the regular league, the title race could easily come down to goal difference.

Heading into the match, both teams agreed that it was a title decider and the match lived up to its expectations.

“We knew what losing or winning this match would mean for us and we came ready for a fight. Strathmore were definitely a hurlde to our title defense and we are happy we showed up. Our game plan worked well and we fought to the last minute,” said NCPB team captain Timothy Kirimi.

The millers took an early lead at six goals to two and the varsity side was rattled. Victor Otuoma stared on goal, denying Strathmore numerous scoring chances much to the chagrin of their tactician Peter Mwathi who kept urging his charges to stick to their game plan.

NCPB stretched their advantage to give goals at seven goals at 12-7 with Peter Omondi and John Wante scoring at will against a disrupted Strathmore defense. The match headed for the half time breather with the millers holding a nine-goal advantage at 16-7.

On resumption, Mwathi’s charges kept the energy on goal going but were unluck on goal. Rashid Ingwela scored twice, goals that would have reduced Strathmore’s deficit to seven but his goals could not count due to fouls committed beforehand.

In the second half, Alan Simiyu, before fouling out of the match with less than two minutes left on the clock, marshalled Strathmore’s defense but it was not enough to stop the highly charged NCPB as they added 12 goals to their tally while resting Strathmore to ten in the last 30 minutes for the final score.

“Nothing worked for us today. We were ineffective offensively and our defense which has, so far been our strong point, did not work too. We kept fighting and changing our plays but we were not successful.

Now we go back to training well aware that our chances of winning the title have now been dealt a blow but nothing is lost yet. We still have four more matches to play before we can declare the title won or lost,” said Strathmore’s Maxwell Munene.

Coach Pudo is now confident the league is NCPB’s to lose as Strathmore presented their biggest challenge, despite his charges’ loss to General Service Unit (GSU) earlier in the league.

Despite the loss, Strathmore remain top of the men’s league at 28 points from 15 matches while NCPB move to 26 points from 14 matches. With only four rounds left in the regular league, the title race could easily come down to goal difference if the two sides go unbeaten in their remaining matches.

Meawhile, Rangers HC bagged maximum points from their third match of the weekend, beating Kahawa HC by three goals in a 33-30 outcome.

In the women’s league, NCPB Women won 38-23 against Rangers Women while Nanyuki picked their sixth victory in ten matches, a 25-16 outcome against Jomo Kenyatta University of Agriculture and Technology (JKUAT) women.